Taking a break from trip-related talks to introduce an amazing band to you. Ewert and the Two Dragons is an Estonian band, but it’s easier to catch them live abroad since they have very few gigs in their home country. Check out their tour dates – if you live in Western Europe, I’m pretty sure there’s a gig somewhere near you.

Their music is difficult to describe for me. Music isn’t made for describing, it’s made for listening. So instead of telling you what their genre and style is and other boring details like that, I’ll link a video instead:

I managed to catch one of their rare Estonian gigs in Pärnu yesterday and I was blown away. Can’t remember when I last smiled through the entire gig. The venue was beautiful, there were small kids dancing in front of the stage and having the time of their lives, the audience was singing and clapping along, the band was happy and I was even happier. 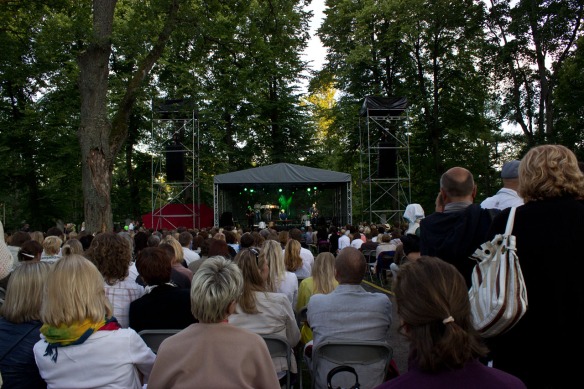 In addition to keyboard, guitars, bass and drums, they also had some extra instruments like a xylophone:

My favourite thing about the stage was the lighting – they had light bulbs hanging in the air and the bulbs switched on and off through the gig.

Seriously, listen to them on Youtube and then go see a gig. You have my guarantee that they are awesome.